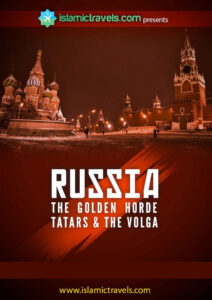 Spanning over eleven time zones and two continents, Russia is the largest country in the world with an array of rivers such as the mighty Volga, forests and towering mountains and a rich and at times tumultuous history stretching back centuries, the Land of the Ivan the Terrible, Peter the Great, Tsars, Lenin and Stalin is a truly fascinating place to explore.

Islam entered Russia via the Caucasus over a thousand years ago and Muslims now make up nearly 20% of the population with the majority strategically placed in the Volga-Ural (Kazan) region and Caucasus as well as significant populations in Moscow and other major cities. The River Volga has symbolic meaning in Russian culture and is often referred to as Volga-Matushka (Mother Volga) in Russian literature and folklore. Islamic rule peaked under Sultan Muhammad Öz Beg, Khan of the Golden Horde, and once upon a time, even Moscow was under the dawlah of Amir Timur (Tamerlane).

Unlike other Muslim minorities in Europe, Russian Muslims are not considered foreign immigrants but natives who form an integral part of Russian society. During the 2008 Beijing Olympics, Russia won 23 gold medals, 10 of which were obtained by indigenous Muslim athletes! Whether you’re in the Muslim republics of the Volga-Ural Basin, the Caucasus or one of the country’s great cities, our travel to Russia is a unique opportunity to get acquainted with its history, culture, art, food and the current state of Islam and Muslims in Russia.

Our guides Alexdranov has over 8 years of experience organising private and group tours in this region.

The package comes without flights and visa but includes, English speaking Russian Muslim guide, all local transportation, breakfast only, 3 or 4 star hotel accommodation. Main entrance fees to sites of interest mentioned below and itineraries can be subject to small modifications depending on the size and composition of the group as well as local circumstances at the time of the trip. Each day there will be a brief for the day, spiritual reminders throughout the day with important historical facts and points by our guide and an evening summary.

Overland journeys may be tiring and sometimes uncomfortable due to changes in temperature and humidity, therefore a basic level of fitness is required to fully benefit from this trip. Days will begin relatively early at around 8.30 am but exact times will be provided by our guide. Suitable places for lunch and dinner will be suggested by our guide.

As flights to Russia and return are not included in the package, you are advised to make flights according to the dates advertised.

Upon arrival in Russia our local operatives will take over all transportation within Russia i.e. to and from the airport and throughout the tour.

3 or 4 star hotels in a convenient location will allow you to easily reach the most famous tourist attractions. Participants will normally spend 1-2 nights in various cities and towns. Breakfast is included.

Rooms: In the standard package there are 2 beds to a room (twin rooms) or 1 double bed for couples. There may also be the option of 3 beds (triple room) for larger families subject to availability. Other features include: en-suite bathroom with shower and toilet, air-conditioning, wi-fi internet connection (free or paid) and satellite TV.

“The walking tour in Moscow was interesting as we got to travel like the locals. Our highlight for the trip is Kazan / Tatarstan: the place, the people, the hospitality was perfect. There was a good balance of Islamic history and political history of Moscow/Kazan. Generally, a well organized trip. We were all expecially impressed by local guide Rushani was energtic and very informative with her guide. Amazing – he was also accommodating to our request to stop for coffee or shop for local delicacies. Very professionally done. We love that the Deputy Mufti took time to talk to us. And their Grand Imam hosted us for the farewell dinner. Made us feel extra special. But most importantly, the dialogues we had were very beneficial as insights to life in Russia as Muslims. The guide in Moscow is a very nice, affable man”.  – Saif-ur-Rahman, Group leader from Singapore, October 2018

“Guides were polite and hospitable as well as patient. brother Abdullah was quite eloquent and knowlegeable about ISLAM and intrduced us to various members of the Moscow Muslim community including the mufti council and non profit organizations.Sister Natalya our guide from Penzaon to Kazan was really amiable and an excellent translator.her command of the english language is excellent,and together with BROTHER Rushan and his knowledge base of Islam and its embryogenesis and growth as well as our visits to the museums and historical sights gave us a good insightful view of the evolution of Islam in Russia. I enjoyed the eclectic nature of the tour ie the Kremlin,Mosques,Cathedrals,the underground with Stalins extravagant marble walls high ceilings and grand chandeliers,and quite unlike the London or Hong Kong underground(both of which I have extensively utilised);Meeting the Imaams of the various Mosques and their singleminded passion for the deen ;the very personal nature of our interaction with the community of rural Srednyaya Elyuzan(their warmth hospitality and picnic will be etched in my memory …..);Kazan was Magical and jumuah at the Qul-Sharrf Mosque the highlight of our visit to the city.I loved the people and their passion for the deen..”
– Anisa Pandor ,South Africa – April 2015